Welcome to Kimberling City,
the heart of Table Rock Lake.

Kimberling City is the premiere family-friendly, residential and recreational lakeside community in the Midwest. Our city is dedicated to preserving a high-quality, relaxed, safe, and natural environment for all to enjoy now and is committed to maintaining these values for future generations to come. 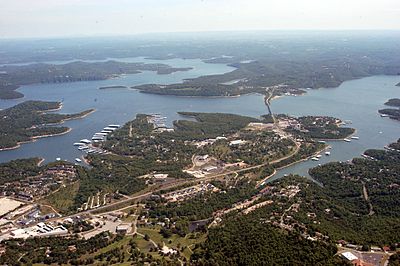 Kimberling City was settled as a direct result of the construction of Table Rock Dam and Reservoir by the U.S. Army Corps of Engineers. The first two power units were ready for the generation of power in June of 1959 and units three and four were completed by August 1961.

The City was named after the Kimberling Family, who for many years had operated a ferry approximately where the present State Highway 13 bridge is now located.

The City has a Mayor/Board of Aldermen form of Government. The City is divided into two (2) Wards with two (2) Aldermen representing each Ward.  The term of office for the mayor and each alderman is two (2) years with elections held each April.

Population according to 2010 Census Information is 2,400.

The amount of land area in Kimberling City is 3.78 sq. miles.

The highway distance from major cities in Missouri to Kimberling City is: